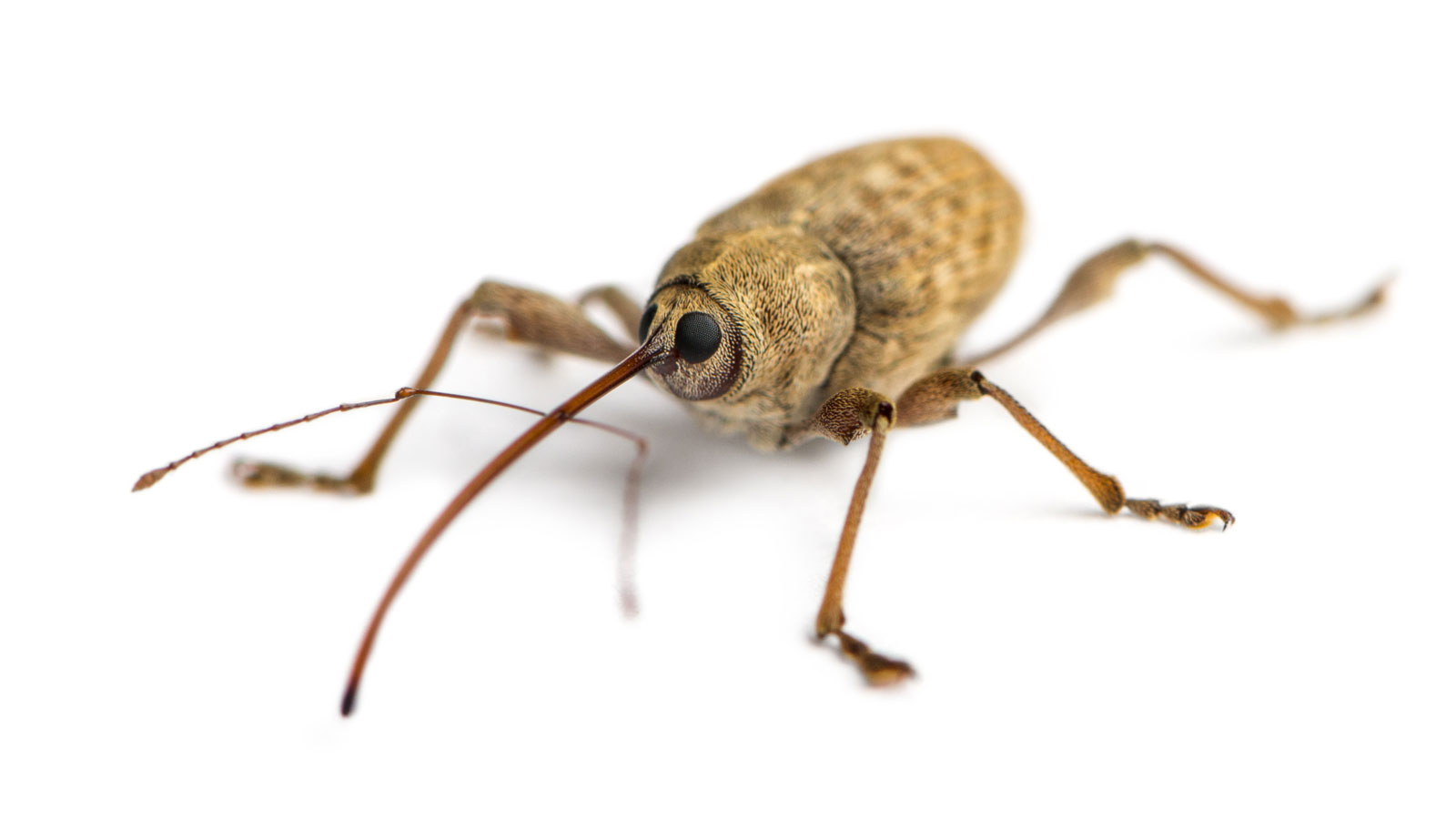 Above: The Curculio glandium acorn weevil is a type of small beetle that uses its long, curved snout to drill holes. An interdisciplinary collaboration between researchers from Arizona State University’s Ira A. Fulton Schools of Engineering and School of Life Sciences studied Curculio glandium‘s relative, Curculio linneaus, which led to the discovery of unique properties of weevil snouts that could benefit both fields of engineering and biology. The acorn weevil snout’s exoskeleton structure could hold the key to a future of new material structures that are stronger and more flexible than what can be made today.

We humans like to think we invent things, but in a lot of cases, nature did it first.

Now, a team of Arizona State University engineers and entomologists (insect scientists) has uncovered a key from nature that could help make our material world better. Their findings were recently published in several life sciences and engineering journals, including Advanced Materials. 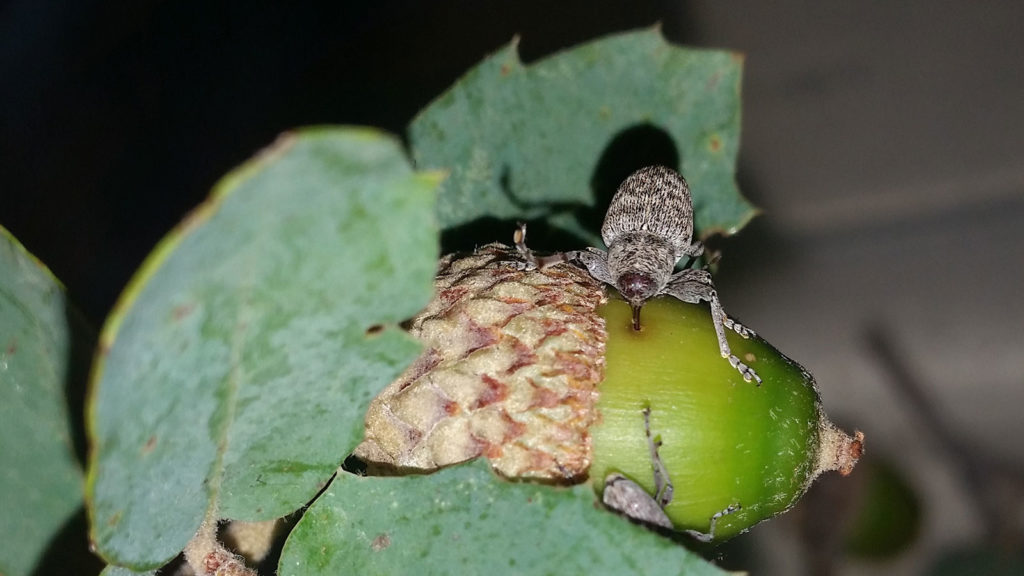 A specimen of Curculio linneaus collected by Andrew Jansen demonstrates how the insect uses its long snout to drill holes into acorns. Photo courtesy of Andrew Jansen

What’s the buzz around bugs?

This the first time Nik Chawla, a professor of materials science and engineering in the Ira A. Fulton Schools of Engineering at ASU, has used insects as inspiration for his research; metal-based composite materials are more along the lines of his expertise. Michael “Andrew” Jansen collects weevils during field work in the cloud forests of Guatemala. The recent doctoral graduate of evolutionary biomechanics initiated an interdisciplinary research collaboration between materials science and engineering researchers in the Ira A. Fulton Schools of Engineering and entomologists in the School of Life Sciences that uncovered undiscovered properties of weevil snouts that could lead to stronger, more flexible materials. Photo courtesy of Andrew Jansen

It wasn’t until Chawla crossed paths with Michael “Andrew” Jansen, a recent doctoral graduate who has long been investigating insects, that weevils came onto his radar.

Jansen studied insect taxonomy and biomechanics in the ASU School of Life Sciences, where he was a member of Professor Nico Franz’s lab of insect systematics and evolution since he began his graduate studies in 2012. His dissertation research explored weevil feeding behavior and biomechanics, or how insects use their bodies to navigate the laws of physics.

Long before his dissertation was complete, a photo of weevil behavior in a scientific journal article drove Jansen to delve into a brain teaser in bug biomechanics: How does a weevil with a strongly curved snout drill a perfectly straight hole in a hard acorn?

Published research didn’t yet have an answer, so Jansen decided to take a closer look at the unique structure of the acorn weevil’s long snout, scientifically known as a rostrum.

Because weevil snouts are very bendy, he assumed they must be rubbery, but they’re not. When Jansen took a closer, microscopic look at the cuticle (the hardened part of the exoskeleton) of a weevil’s snout, he saw it resembled fiberglass or carbon fiber.

It was Jansen’s idea to approach Chawla about studying this mysteriously strong and flexible organic structure.

“It had this layered structure to it that you really only see in artificial materials,” Jansen says. “So, at that point I thought maybe I should get in touch with someone who’s an expert on that kind of stuff, and Dr. Chawla happens to have written the book on composites.”

Jansen knew it was a risk at that point in his graduate school career to ask a renowned materials scientist if he wanted to look at insect heads, but it paid off.

“When I emailed Nik, I didn’t expect he was going to actually email me back, much less eventually join my committee for my dissertation and get involved in my research,” Jansen says.

Chawla, Jansen and the rest of their research team — Nico Franz, a professor of entomology and Jansen’s doctoral advisor, and Jason Williams, a materials science and engineering assistant research scientist — were glad Jansen reached out. Researchers find the bug has a cool feature

Once Jansen learned how to use the 4D Materials Science Center’s testing and imaging tools to collect information about weevil snout structure and properties, the team members made some interesting discoveries about materials and insects.

They found the weevil’s snout is made up of alternating hard and soft layers in a very complex configuration, which leads to a strong, flexible structure.

“Nature figured out a long time before we did that having fibers at different angles gives properties that are uniform throughout,” Chawla says.

The weevil snout’s microstructure alternates between hard and soft layers that are arranged like a helix (like the shape of a DNA strand). It’s a very effective way to achieve a strong and flexible material — one the weevil can bend easily for feeding but be strong enough to drill through a hard acorn shell to lay eggs. However, it’s not a method that has been used in manufactured materials to achieve similar properties, Chawla says. A scanning electron micrograph of a section of weevil snout shows the complex pattern of fibers that give the exoskeleton its flexibility and strength. Image courtesy of Nik Chawla, Nico Franz, and Andrew Jansen

“The holy grail in a lot of materials is how to make something that is really strong but can also be stretched,” Chawla says. “One of the key things about this work is we’re starting to figure out how to get the best of both worlds.”

Pure aluminum, for example, is very stretchy, but not very strong. Adding substances to aluminum to form composite materials can change these properties. Current practice is to introduce harder particles such as copper or magnesium to pure aluminum to considerably increase its strength, but the resulting composite material loses some of its stretchiness and flexibility.

But having materials with high marks in both properties is crucial for many critical applications. Airplane materials and highrise building materials, for example, both must be strong but also flexible to deal with turbulence or impacts of earthquakes.

The researchers’ findings on how weevils evolved their flexible and strong snouts could change how humans can manufacture similar materials to help avoid catastrophic structural failures.

“The understanding we got from this work is really to be able to apply this now to man-made engineering structures,” Chawla says. “Insects and nature are a lot smarter than we are.”

Oftentimes, the most unexpected and scientific of revelations can be found at the crossroads of different disciplines, which is why ASU strives to foster transdisciplinary research as much as possible.

“It’s where all the interesting stuff is,” Jansen says. “It’s hard to pick up a book on laminate mechanics as a biologist and try to figure it out and apply it to your own research. But those sorts of intersections are where most of the unknowns are in science, and that’s where we’re going to find the most interesting breakthroughs.”

“We tend to look for other disciplines when we arrive at boundaries within our own,” Franz says, “and there’s promise to go beyond them with insights from a traditionally separate discipline.”

The interdisciplinary field of biomechanics — studying how a plant or animal moves on a physics level — is one such area. It’s a challenging field of study, but “in the end it’s worthwhile because you’re finding things that nobody has ever seen before, or even thought about asking before in a more traditional context,” Jansen says. “It’s really only possible when you have that interdisciplinary angle to see some of these questions or even begin to tackle them.”

Jansen is no stranger to pairing with engineers for his research. He has previously worked with Fulton Schools faculty members Dan Aukes, Heni Ben Amor and their graduate students on nature-inspired robots and artificial intelligence [watch a video about this research]. But for something as important as his dissertation, Jansen knew ASU was a unique place that would accept such an interdisciplinary project.

“If I had been anywhere other than ASU I don’t think [my dissertation project] would have flown,” Jansen says. “The faculty at ASU were incredibly supportive of a project that was going in a direction where no one could see how it was going to turn out, and they were supportive of me doing interdisciplinary research.”

For biologists, identifying the underlying structural properties of a weevil’s snout has important ramifications for insect research.

“I think the idea of a modified exoskeleton used to adapt to different amounts of force for different types of usage is going to be really common if we look at it a bit more closely,” Andrew Jansen says. “If we look at other systems I think we’ll see the exact same type of modifications, or something completely new, but I think it’s more common than we give it credit for — we take the material for granted.”

“[Jansen] made large methodological leaps while analyzing his study system in a way that advanced both evolutionary biology and mechanical modeling of the insect cuticle,” Franz says.

A background in entomology wasn’t enough to get the job done. An interdisciplinary collaboration and learning new skills in biomechanics, materials science and even mathematics were key to Jansen’s success.

The recent graduate says he’s most proud of getting his work published in the Journal of Structural Biology, where he outlined the mathematical model he created for his dissertation to describe the mechanics of the acorn weevil’s exoskeleton. This was the fundamental basis for understanding why the weevil’s snout structure led to the strong-but-flexible mechanical behaviors the research team witnessed.

To do so, he took a page from the engineers’ handbook to create simulations of insect behavior from 3D models of the insect. Jansen says biologists often don’t typically measure the material properties of the species they’re studying before they begin plugging them into simulations. He now knows from experience why they don’t (it’s very difficult to do), but accurate measurements are important to show the functions of the exoskeleton cuticle material.

“Any mechanical engineers or materials scientists would tell you if you give the model the wrong material properties, you’re going to get the wrong results,” Jansen says. “This is something that everyone normally does, but if you look through the biological literature they just ignore a lot of aspects of the cuticle’s behavior, which is a problem.”

He hopes to inspire his fellow biologists to take the time to get their models correct so they provide realistic insights into what the natural world can do.

Jansen thinks his research is just the tip of the weevil’s snout in terms of what scientists and engineers can learn from insect biomechanics. There are approximately 60,000 species of weevil alone, and with more than a million known species of insect and millions more to be discovered, the possibilities are endless.

“Hierarchically structured materials is a bit of an emerging field, especially in living materials,” Jansen says. “I think the more we look at living materials the more we’re going to find completely weird, off-the-wall types of innovations that we could borrow from.” New understanding of an old alloy leads to prestigious award